Li'l one started pre-school on the 5th of June. It’s been just about 3 weeks and she has started grumbling already. Everyday we pick her up from school and she asks, “school again tomorrow?”

It’s amazing – in two short weeks she has grasped the concept of a weekend. She calls it her ‘holidays’. Every other day she asks, “When are my holidays?”

This is all quite surprising, since she was the one eager to start school. In fact I had planned to hold her back another year, and teach her at home what she would have learned during her first year at pre-school.

Looking through her syllabus for the year, I found that she is already familiar with half of what they’re going to be doing. But ever since she was two, she had been asking about school and how soon she could start. Seeing her cousins go to school, I guess she wanted to start, too.

Her attitude towards school changed once she actually started going. First it was the uniform. She HATES dresses and absolutely refuses to wear them. A three-year-old with a stubborn mind of her own! What’s to become of me as she gets older?!?!?

Anyway, when she found that she had no choice, she relented and agreed to wear the ‘stupid’ dress. (That’s what she calls it! I actually asked the school authorities if it would be OK for her to wear shorts like the boys do, but they refused. Yes, I’m crazy… I know that.)

Second, I think she’s getting picked on in school. This, in itself, is surprising, because she’s normally quite a bully. ;-) Everyday she comes back complaining about how the bigger children pinched her or pushed her. I’m not sure about the pinching bit, but the pushing bit is true since she came home that day with her uniform all muddy. She had obviously fallen down. So we questioned the teacher. Her reply? “Oh, they were just playing.”

And so begin the quandaries of parenthood. Do I step in and let it be known to the bullies how I feel exactly? Maybe shake them till their teeth rattle?? Or do I do nothing and let li'l one handle it herself? Or do I tell li'l one what to do the next time she gets bullied? As in, ‘an eye for an eye’ kind of attitude…. Hmm.. any suggestions?

OK.. enough about school for today. Now, this post seems incomplete without me making fun of my little angel. Here’s a new excuse for not eating that she came up with recently:

Li'l one: But mummy, I can’t have dinner now. I just ate some biscuits.

Me: You ate those biscuits hours ago, it’s dinner time now.

Li'l one: The biscuits… they’ll fight with all the food… in my ‘stung-up’ (stomach)! I might get a ‘stung-up cake’ (stomach-ache)!
Posted by arabicaah at 2:27 PM No comments:

Our place is a mess… I guess you could say we’re redecorating. Anyway, after about 5-6 days of not having her toys easily accessible, lil one got creative. Here’s what she did when she felt like going for a drive: 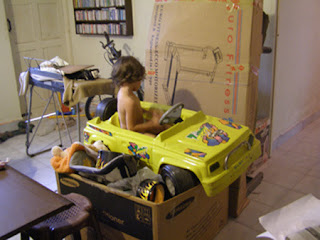 All that driving must have really tired her out…! 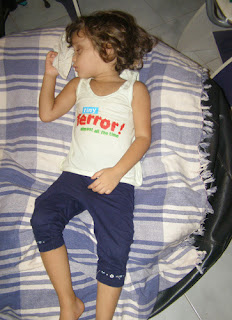 Posted by arabicaah at 5:30 PM No comments:

Email ThisBlogThis!Share to TwitterShare to FacebookShare to Pinterest
Labels: goa


In an effort to encourage li'l one to be independent, we had bought her a couple of plastic stools so she could reach the taps to wash her hands, brush her teeth, etc. by herself. Now I’m beginning to wonder about the wisdom of it all.

Yesterday, when I realized that she had been missing for a while, I went around the house looking for her. I found her in the kitchen, standing on her stool at the sink.

I had opened a new bottle of dish washing liquid the previous day. The level had now dropped to the half-way mark. There was a bowl in the sink. It had some a lot of liquid mixed with water and the scrub pad and sponge were soaking in it.

Me: What are you doing?

Li'l one: I’m washing my hands.

Me: With the scrub pad?

Li'l one: No… I was washing my bowl with that. The bowl was dirty, mummy… I’m just helping….

Well, I guess it’s the thought that counts!
Posted by arabicaah at 1:56 PM No comments: